skip to main | skip to sidebar

this is the last post on this blog.
Posted by Holland Chase at 6:36 PM 3 comments: 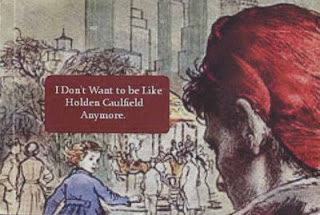 quote of the day:

"Redheads are said to be children of the moon, thwarted by the sun and addicted to sex and sugar." -Tom Robbins, Still Life with Woodpecker
Posted by Holland Chase at 10:49 AM 1 comment:

because valentine's day is for lovers . . .

well, just read this.
Posted by Holland Chase at 10:32 AM No comments:

Labels: the spice of life = putting ketchup on my hotdog

What could you take from a man who gives nothing?

In hate and in selfish pride you withhold ransom denying those without the fat which they deserve. When Truth she asks, "Ain't I A Woman?" and you pass her by knowing that it's not her just deserve -- you speak without thinking, but what's worse, you think without speaking.
Your selfish, bleeding heart turns you into not just a swine -- an entire hoard. Constantly you slide by them, each time sending a chill up your spine. That's the fingers of sympathy, of compassion and kindness running and grasping for your attention. But instead you treat it as a stray dog with which you cannot find it within yourself to emote not one, NO, not even one ounce of pity despite your knowledge, your experience, your own personal self-worth.
Even if on the rare occasion you actually do notice the man in the wheelchair sitting outside the cafe selling long-stem roses of various colors, does it really cause you to become imbued? Or rather is it simply just scratching for a moment at a scab that can never quite seem to heal?


*Inspired by the documentary "Great Speeches From A Dying World"

Posted by Holland Chase at 11:43 PM No comments:

so here's some interesting news i found. i hope you find it as funny as i did.
Posted by Holland Chase at 1:17 PM 2 comments:

Yesterday I met ten dozen people
their tongues were all broken.
Yes, I'll be the first to admit
I'm a little soft spoken
But what they don't say is worse I tell you
a broken tongue is better than not having one.

In a land of oceans turning black rather than blue
people looking for miracles, they've got something to sell to you
and they'll tie to God what meaning suits them best
it's not what comes from bottles, it's what you have left.

Oh ye great lands spread the truth afar
arm your men with weapons, sound the alarm
take what's not yours, you claim your Book tells you so
I don't know which book you're reading, but your truth isn't gold.

Now them people and all their broken tongues
began choking and talking and spitting like they should've done
about a million years before the troubles begun
don't let them fool you; stick with your mouth, stray from the gun.
Posted by Holland Chase at 1:38 PM 1 comment:

I first arrived last night around 7:30. Heather met me at the station and from there we went straight to the loft, mostly to drop off my bags (and shower). We were both starving so after I met my other roommates, we went to this little place less than a block away that has no name other than a deer on an old sign on the front of the building so we decided to name it "The Stag." Pretty cool little place. Great music, great food (humongous bacon cheddar burger, salad, and potatoes). From there, we came home watched The Office and crashed.

Today was interesting. My first real taste of the city, so to speak. After watching a few short films this morning, we went to Silver Spurs, a place we just walked across, for brunch. I had three pancakes and an orange slice I stole from Heather's plate. We walked down the street peeking into shops here and there if anything managed to catch our eye. Eventually we ended up at Ground Zero and also saw the new World Trade Center location. As we turned the corner we found the church that housed so many of the rescue workers during all of the turmoil because of its close proximity and the fact that it was the only building to not suffer from the wreckage of the attacks -- not one window was broken. It had a really well maintained old cemetery out front, but many of the tombstones couldn't be read due to acid rain, pigeons, and years and years of age. The inside of the church was actually converted into a museum -- it contains information including time lines of the event, letters written, blankets given, prayers offered, etc. It was really depressing to see the memorial section with all of the photos and flowers and small toys and trinkets. After staying there for a while we decided to walk back to our place and not ride the subway or anything. So this part of the adventure started with walking across the Brooklyn Bridge which was about as touristy as you can get I guess. It was really cool with a great view and loads of people, but, I swear, it was never ending. It took 30 minutes to cross with taking photos and everything. Speaking of which, the genius writing this decided to leave his camera at the apartment instead of taking it with him like a moron. Missed a whole lot of great shots, but I guess I'll get over it or do it all over again. After finally making the crossing we knew relatively which direction to find home, but nothing exact. We walked forever it seemed, all the while seeing some great architecture and a beautiful park and the Pratt Design Institute, not to mention the ghetto we got lost in for about 2 hours. Eventually we both gave up and boarded a bus so that we could finally sit down for a bit. I fell asleep time and time again, trying to keep my eyes open, but I didn't sleep all that great last night, and I woke up fairly early with the sun in my eyes. From there, we transferred to the L and then to the subway and got back to our neighborhood (thankfully our subway stop is extremely close to our building). When we found a map we realized how close we actually were. It was ridiculous.

It was so great getting to finally kick off my Chuck's. Another chunk of the innersole on the right one fell out so it became pretty uncomfortable and I'm still walking like my foot is being cut open, but guess what -- I survived.
Posted by Holland Chase at 5:38 PM 16 comments:

those who expand my universe daily: